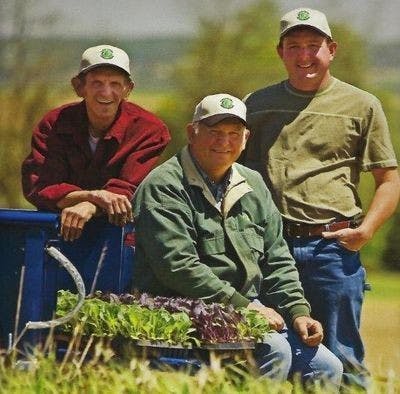 My great-grandfather lost his job in the automobile factories in Detroit during the Great Depression. He packed up his family and headed south, unsure of what the future would hold. While stopped in New York for the night, he saw a house and 20 acres listed for sale in King Ferry. He bought that farm and settled in to raise grain, corn and red kidney beans. In the mid-1940’s my grandfather began raising green beans, and this area became the largest green bean producing region in the United States. A co-op was formed in King Ferry to help sell the crop. My grandfather was the Field Man and oversaw the harvest. The green beans were all picked by hand. The farm continued to grow and prosper, and cucumbers and sweet corn were added in the mid-1950s. Green beans continued to be the main focus, and the Co-op continued to handle the sales. In the late 1960s the co-op went bankrupt and a fire destroyed the entire facility. My grandfather bought the property at an auction and rebuilt the packing house. It became known as Cayuga Produce, sales company for Turek Farms. With help from my uncle and father the farm grew in size and focused mainly on green beans and sweet corn.

Today my father and uncle and I are still working together on the farm. While sweet corn is our main crop now we also grow green beans, summer and winter squash, pumpkins, cabbage and black oil sunflower seeds. We have a core group of employees, most of whom have worked with us for over 25 years. They treat the farm as their own and have become family to us. My grandfather believed in continuing education so he founded a scholarship at our high school for students pursuing a career in agriculture. Two of our summer employees who have recently graduated high school are now studying agriculture in college. Our three children are excited to carry on the tradition and work on the farm in the future. Our youngest in particular lives and breathes farming and would like to drop out of school and start his career now.


Anything from Turek Farms this week?

We Love Local
Are you a local artisan or farmer? Get in Touch!